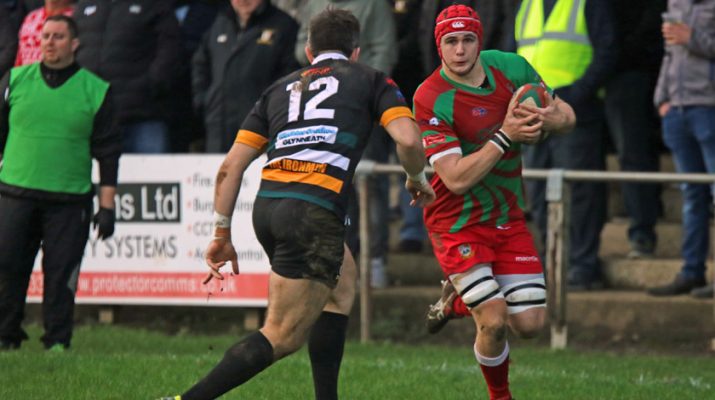 Two tries in each half may well have earned Merthyr a bonus point victory but it is Bedwas who can justifiably claim to have ‘won the battle but lost the war’ as two late Michael Dacey tries earned his side a losing bonus point and so nearly victory.

After heavy rain in the previous 24 hours the Bedwas pitch was once again in fine condition though heavy in patches.

Bedwas with new permit signings from Cardiff in Kieran Martin and Sam Pailor boosting their pack notched the first points of the afternoon early on via the boot of Joe Scrivens.

Merthyr responded with a period of intense pressure but stoic defence from the Bedwas side kept them out until the 10th minute when number 8 Hemi Barnes was driven over for a try converted by Matthew Jarvis.

Whilst defending well Bedwas were not quite so fluent in attack and Merthyr were able to counter to keep them at bay and present a constant threat with ball in hand, although they too made mistakes, knock-ons and losing possession kept scoring opportunities down.

Winger Jay Baker crossed for his sides second try midway through the half this time Jarvis missed with his conversion.

Joe Scrivens kicked a second penalty after 26 minutes to take the score to Bedwas 6 Merthyr 12 but the scoreboard went unchanged for the remainder of the half as neither side was able to find a way through.

Whilst shoring up the scrum was vital it was Merthyr who profited with two tries in four minutes from Nathan Trevett and replacement prop Louis Jones both converted by Jarvis; Bedwas fans feared the flood gates may well open.

Rhys Hutcherson replaced Chris Budgen and with their line under siege Tom Rowlands was adjudged to have a ruck illegally and a yellow card was issued.

Playing with fourteen men seemed to energise Bedwas and there followed a spell of good pressure with no reward other than not allowing Merthyr to advance their score.

Whilst Rowlands was off the field Ian Jenkins was injured and Michael Dacey re-entered the fray, followed by three replacements to the backs; Ben White for Dion McIntosh, Callum Williams (on debut from Senghenydd) for Adam Williams and Rory Harries for Tom Rowlands.

The fresh legs had the impact the Bedwas coaches would have hoped for and began to attack the Merthyr defence which was also shorn of a man after second row Paddy McBride who was sinbinned for stamping.

Bedwas left their revival late; from a catch and drive after 76 minutes Mike Dacey was the last to emerge from a pile of bodies to claim a try, Scrivens adding the extras. It was the same combination with in stoppage time reducing arrears to just six points and with three minutes to play it was all Bedwas who through everything at a shocked Merthyr side who clung on by their fingertips to claim the victory.

Bedwas Man of the Match sponsored by Casa Mia Restaurant of Caerphilly was awarded to second row Gareth Allen.

Attention now turns to the game on Boxing Day when Ebbw Vale visit the Bridgefield with both sides wanting to put a show for the BBC cameras for this live televised game. Kick-off is at 2-30pm.

Gallery of images from this game can be found at: https://www.flickr.com/photos/bedwasrfc/albums